The vaccinology lab is focused in the study of the dsRNA viruses, essentially members from the Reoviridae family. There are currently two lines of investigation in the lab. The first has as goal the creation of an affordable and equitable vaccine against rotavirus, which is responsible to kill annually a half million children under five years old in developing countries. The vaccine will be based on recombinant spores of Bacillus subtilis. These probiotic bacteria are able to form biofilms in vitro (fig. A) and there is increasing evidence suggesting that B. subtilis is also able to form biofilms in the gut of mice, rabbit and humans. We expect that the recombinant spores will germinate and form a biofilm in the gut of a mouse model, thus allowing a neutralizing humoral response against rotavirus. The second line of research is based in the formation and the dynamics of viral factories from rotavirus (figs B and C) and mammalian orthoreovirus (fig.D). Viral factories are cytosolic structures corresponding to the machinery of replication of the virus, in which occurs the transcription from positive sense template, replication of the dsRNA genome segments and assembly of the newly synthesized viral cores. We are interested in the role of the viral and host components involved in the formation, maintenance and dynamics of these structures.(ceichwald@vetvir.uzh.ch).

Dept. of Microbiology, University of Zurich 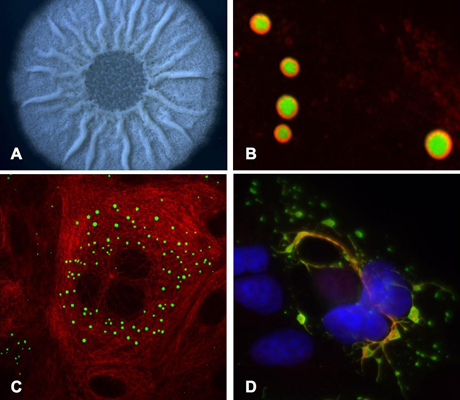